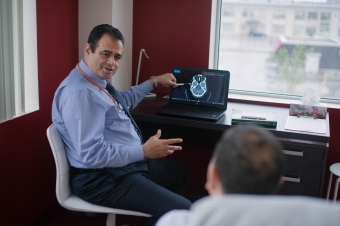 One of the most aggressive types  of Breast Cancer known in oncology  is the Triple Negative (TN) type, which means that the surface receptors of the Cancer Cells are negative for the Hormone Receptors (Estrogen and Progesterone) as well to the Epidermal Growth Factor (Her 2Neu).  The main features of this type of breast cancer is that it affects younger women (at their thirties or forties), usually present at an advanced or sometimes terminal stages, but the most important fact it that, they usually respond poorly to chemotherapy and this is translated into a poor survival figures for patients with this disease that come down to a median survival of 1 year for patients with stage 4 disease, and unfortunately, nearly all patients with stage 4 disease die from breast cancer.

What are the reasons that make this disease so aggressive?

There are many reasons that are responsible for the aggressiveness of this disease such as lack of the proper hormone receptors so they do not respond to the hormone blocking agents, or Epidermal Growth Factors (Her 2 Neu), so even Herceptin (the Biologic agent that blocks the Her2 receptors) will not be useful for these patients. However, the most significant reason for resistance of this type of cancer to treatment is that their genes can be repaired so efficiently that every time chemotherapy is given,  the damage caused by chemotherapy to the tumour cells is repaired so at the end chemotherapy is rendered ineffective in treating this disease.

What is the new research about the Triple Negative Breast Cancer?

In 2015, a group of researchers in Vanderbilt School of Medicine Nashville, Tennessee (Vandaga et al 2015 https://www.ncbi.nlm.nih.gov/pmc/articles/PMC4270831/pdf/nihms609530.pdf  revealed that,  the Triple Negative Breast Cancer is not a single disease entity, they exhibit a few different disease entities, each one of them is unique in biology and cell signals that makes them not responsive to the usual standard chemotherapy. One type of them (called Basal cell type 1) responds to the Chemotherapy Cisplatin which is not usually given for the Triple Negative Breast Cancer, and another type called mesenchymal type that responds to Dasatinib a biological agent not chemotherapy. Furthermore, a third type called LAR responsde to the well know hormonal blockage agent (Antiandrogen) Bicalutamide, a well know drug that is used for treatment of prostate cancer, and carries the name (Casodex).So, this research is actually a revolution in the treatment of this disease.

Why this research is a revolution in the Management of triple Negative Breast Cancer?

This research is revolutional as it explained to a large extent why patients with Triple Negative Breast Cancer fail the current standard chemotherapy  which is based mainly on three chemotherapy types: Taxol (or Docetaxel), Adriamycin (or Epirubicin ), and the Cyclophosphamide (or Endoxan). Patients either receive the 3 agents together, a regimen called TAC for 6 cycles every three weeks, or as AC (Adriamycin Cyclophosphamide) for 4-6 cycles then a weekly Taxol for 12 cycles . What are the implications of receiving these aggressive chemotherapies without a success or control of cancer?

The major drawbacks of using these chemotherapy regimens are simply treating this type of resistant cancer with low effective therapies, suppressing the immune system with this powerful medications and immune suppressors with a very low or even no gain, not to mention the huge medical and health costs that result from  buying the chemotherapies to recruiting the staff who administer these chemotherapies, doing a long list of blood works and most important is hospital admissions for patients who develop very low immunity and have to be admitted for treating febrile neutropenia or severe thrombocytopenia that exhaust the country’s financial and economic resources with no great success in disease management.

What is the solution?

The most important step to overcome the obstacles of poor disease management or resistance is to start as soon as we can the new treatment modalities that were highlighted above that are based on the detailed gene profiling of the Triple Negative Breast Cancer such as Cisplatinum, or Blicutamide (or Casodex ). Nevertheless, these new interventions and chemotherapy treatments need to be tested first before giving it to patients with this disease, and wait for many years (at least 5 years from the start of the clinical trials) to prove its efficacy and superiority over the current chemotherapy treatment regimens (TAC and AC then T). Research in oncology  takes a longer time than other areas of the medical research as it is not only about how much disease shrink or even disappear with chemotherapy, but with how long do patients live without the disease (this is called disease free survival), or how long the cancer patient lived since she was diagnosed with this disease (that is called overall survival).

Many patients ask me what about the naturopathic medicine? Is there a role in treating this type of cancer, given the fact that it is an aggressive type of cancer, and the currently available mainstream medical treatments of chemotherapy are not achieving a good control or survival results. The answer to this question is that, the standard treatment for cancer is the surgery, chemotherapy and radiation. Natuopathic treatment supports the conventional medical care. It works through many avenues such as improving the immune system, creating an environment that is not suitable for cancer cell growth and multiplication, stimulating apoptosis (or programmed cell death) which is simply switching off the eternal division process that cancer cells have and returning it to the normal rate, and also reducing the process named angiogenesis which is forming a new blood vessels by the tumour cells so by attacking these blood vessels, the tumour cells don’t find any source of nutrition or growth and they eventually die. The combination of the different naturopathic interventions strengthen their anticancer properties and can be a great asset in downgrading the aggressiveness of the Triple Negative Breast Cancer. Currently there is no strong research in this area of natural treatment interventions in the Triple Negative Breast Cancer, however, it is highly encouraged to start working on the research in this area and recruit patients to receive natural interventions to help fighting this aggressive tumour.

What are the natural interventions recommended in the Triple Negative Breast Cancer?

There are many natural interventions that can be used widely in this type of aggressive cancer such as the use of the high dose intravenous vitamin C (Ascorbate) that works by increasing the hydrogen peroxide molecules around the cancer cells and reducing the angiogenesis (new blood vessels formation), so, eventually suppressing the tumour activity. High dose intravenous vitamin C can be given in a different schedules that may range from a once weekly infusion to a thrice weekly infusions. The rate of the infusion differs with the dose prescribed, so it can be as short as one hour in 25 grams dose to as high as 3 hours in 100 grams dose. Other natural interventions can be used with significant benefits to the Triple Negative Breast Cancer patients such as vitamin D and the Epigallocatechin Gallate (EGCG) which is the active antioxidant material in the green tea extract.

Do you have any questions? Need help?